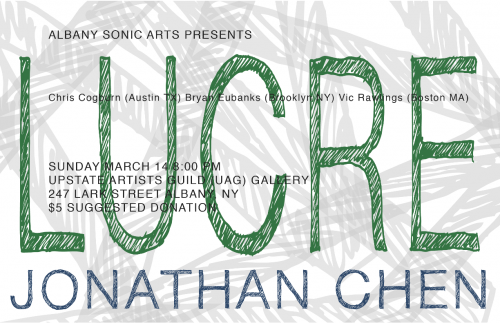 Working with exposed circuits, extended ampli?ed cello, low-? modular synthesis, and
stripped down percussion, Lucre, the trio of Chris Cogburn (Austin, TX), Bryan Eubanks
(Brooklyn, NY), and Vic Rawlings (Boston, MA), come together for the ?rst time to de-
velop their music for ten days in the Northeast. Long standing duo work exist between
all three and the idea for a trio came about during a gathering of musicians in Seattle
during August of 2009.

Vic Rawlings and Bryan Eubanks are familiar to Albany audiences through two previous
Albany Sonic Arts appearances. Chris Cogburn is making his Capital District debut.
Cogburn is based in Austin, TX where he presents the No Idea Festival, an annual
gathering dedicated to improvised music.

Jonathan Chen will perform a solo set of music for electronics, viola and violin. The
electronic work is created by producing feedback through a trumpet: a small micro-
phone is positioned in place of the mouthpiece and a small speaker is set next to
the bell. The feedback is altered by pressing or releasing the valves on the trumpet and
by ?ltering the frequencies via equalization and volume control on both an ampli?er and
a mixer. The work for viola, entitled “de-clime” involves the use of a metal mute placed
lightly on the bridge, coupled with bowing while changing pressure and speed. The re-
sulting sounds include difference tones and beating as the pitches gradually move
higher throughout the duration of the 15 minute work. The works for violin focus on tim-
bre and pitch while employing extended techniques such as preparations, sub-tones,
and micro-spiccatto. A wide variety of sounds are produced at dynamic extremes.

Born in 1974, Jonathan Chen is an improvisor, composer, and installation artist. His solo
work has  been presented in cities such as Atlanta, Beijing, Berlin, Chicago, London,
Luzern, New York and more. As a collaborator, Chen has worked with Tatsu Aoki, An-
thony Braxton, Gene Coleman, Nic Collins, Bill Dixon, Ensemble Noamnesia, Flux
String Quartet, David Grubbs, Alvin Lucier, John Zorn (brie?y) and many others, per-
forming both in the U.S. and internationally. Chen received his MM in Violin Perform-
ance from Northwestern University, his MA in Music Composition from Wesleyan Uni-
versity, and is currently working on his PhD in Electronic Arts at RPI in Troy, NY.