Edward Forstman at ArtsBHAM reviewed my recent concert with Matt Bryant at the Hoover Library Theater.

Part of the magic of Holland Hopson’s performances lies in the mystery of just how much he has planned out beforehand and what’s being extemporized. He is a rapt listener to his own performances, nuancing each refrain’s iteration with distinctive stresses, pitch bends, additions, and deletions. He began with a piece he used on the BAMA DIY concert reviewed in August, and yet it came off as freshly conceived and decidedly different, as if he’d made it up on the spot.

His set consisted of eight songs. Highlights included Hopson’s intense lament of forbidden queer love, the ballad “Laurel Cove,” and his hazy and weary “Over Yonder’s Ocean,” which yearned for a beautiful heaven “where the sun swings lowest over yonder’s ocean.”  Hopson’s vocals were resonant and full of character. He offered his audience a warm, joking presence in between songs and was a consummate storyteller throughout. 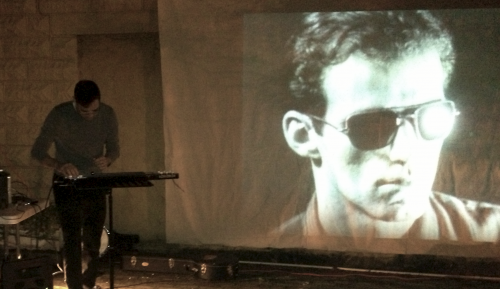 Tomorrow I play a free concert at the Hoover Library Theatre with Matt Bryant in a performance billed as Traditional Instruments Reimagined. I’ll perform a song-based set of music for banjo and live electronics. Part of the performance will be on my newest instrument – a custom electric guitar/banjo hybrid built for me by Jefferson Pitcher of Pitcher Guitars. (More about the instrument later…)

Matt Bryant performs on ukulele and electronics. I heard him give a blazing performance at the Spring Street Firehouse in May. I’m looking forward to hearing more.

The Hoover Library Theatre’s main stage is being renovated, so this event will be in the upstairs venue.