I’ll be playing saxophone as part of an ensemble performing James Tenney’s “Swell Piece #2 – for Pauline Oliveros.” A440, all the way. Looks like a great program. 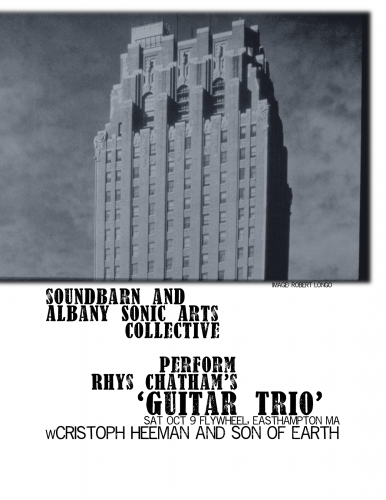 Easthampton! Are you ready to rock?!

If you’d like to follow along, you can bring your own copy of the Swallowtail score. The piece is the next installment of my glissando music series–in the tradition of glissando masters James Tenney, Alvin Lucier, Iannis Xenakis, Lois V Vierk.

And at the risk of sounding like a ginsu knife commercial…But wait, there’s more…

I’m a long-time reader of Kyle Gann’s Postclassic, so a bit surprised that I don’t point more often to  the gems he posts. I couldn’t pass up his latest entry, though, since it pulls together so many figures of contemporary music and finds connections between them. Case in point is this quote about James Tenney:

Someday there will be a book on James Tenney, who studied with Varese, befriended Ruggles, argued with Partch, made psychedelic eletcronic music with Mort Subotnick, played in the ensembles of Steve Reich and Phil Glass, taught alongside Harold Budd, and taught Peter Garland, Larry Polansky, John Luther Adams, and Michael Byron, among many others. Tenney is a line wandering through American musical history, drawing a variety of unexpected connections. The people most central to American music, those who can’t be pulled out of the fabric without it unraveling, are not always the household names.

I can’t wait for that book on James Tenney; if we’re lucky Kyle will write it. Speaking of Kyle’s writings, he’s currently working on a book about Robert Ashley–another one of those wandering lines–who he quotes:

“The only thing that’s interesting to me right now is that, up to me and a couple of other guys, music had always been about the eventfulness: like, when things happened, and if they happened, whether they would be a surprise, or an enjoyment, or something like that… It’s about eventfulness. And I was never interested in eventfulness. I was only interested in sound. I mean, just literally, sound in the Morton Feldman sense…. There’s a quality in music that is outside of time, that is not related to time. And that has always fascinated me… That’s sort of what I’m all about, from the first until the most recent. A lot of people are back into eventfulness. But it’s very boring. Eventfulness is really boring.”

I find Ashley’s ‘eventfulness’ formulation to be useful. I’ve often thought of my music’s tendency toward uneventfulness (here here and here, for example) as related to landscape, particularly landscape painting or photography. My interest in field recordings and soundscapes both grows from that predilection and informs it.