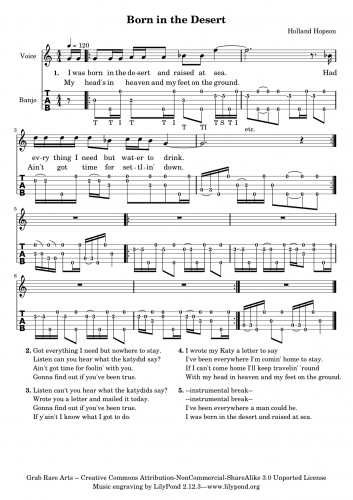 A recent discussion on one of the clawhammer banjo lists touched on two perennial questions of tablature:

I’m not going to tackle the first one other than to say: both are useful, in my experience. But the second question got me thinking about the differences between tablature and other notation systems.

Tablature describes what to do, not what sound to produce

As someone who learned traditional western notation first, this was a revelation to me. Tablature seems more like a cousin to Labanotation or other dance notation systems than to traditional music notation. I think the possibilities of this type of notation are worth exploring in other musical contexts.

Why is this type of notation a good fit for the banjo? For another instrument (played in a traditional manner) describing physical action may be overkill. For example, each key on a piano produces a unique sound, so there’s no ambiguity when Common Practice music notation specifies a particular pitch. A few fingering notes about how to play the passage usually suffice. The banjo, among other instruments, can produce the same pitch in a number of different ways, so tab can greatly clarify the intended way to perform. This is especially important given multiple tunings that are common with old time banjo music.

This action-oriented quality of tablature can also be an advantage for conveying stylistic aspects of a particular performer. For instance, certain passages may be just as easily performed using pull-offs or drop-thumb technique, so the choice of which to use can illuminate a particular performer’s approach. Of course, tablature is no better than any other notational system at conveying subtle aspects of style such as rhythmic feel or accent.

So again, why can it be hard to make sense of certain tablature? Because it describes what to do and not what sound to produce. If you don’t already know what a particular tune is supposed to sound like, you may have trouble decoding the tablature. And to make it even harder…

It’s usually easy to tell the intended function of each musical part in common practice notation such as melody vs. accompaniment or figure vs. ground. Sometimes these distinctions are accidental or stylistic. For example, melodies tend to involve the highest notes, and harmonies tend to be outlined by bass notes which are–not surprisingly–low, so the parts are often written on separate staves or their stems point in opposite directions. Foreground and background parts are often differentiated rhythmically and thus barred separately. Even when such rules break down, they often do so in a predictable fashion (i.e. the tenor line carries the melody in Shape Note singing). Or course, anyone who has looked at late-romantic or impressionistic piano music knows that ambiguity abounds even in Common Practice notation, especially the further the music itself gets from the Common Practice era.

Tablature is much less clear, even when given something as simple as an 8-bar, tonal fiddle tune. Of course, some gestures are easy to decode. The typical clawhammer bum-ditty is an obvious rhythm and harmonic filler, but even a string of 8th notes could be ambiguous, with some belonging squarely to the melody and others serving as decoration. Usually the notes played by the fifth string drone are a safe bet to belong to the accompaniment, but with “melodic” clawhammer styles you can no longer assume that activity on the fifth string is unrelated to the melody.

Now back to our original question: why are some tabs so hard to understand? Because with tablature, every action specified must be decoded at least twice: once into sound, and then that sound must be placed in a musical context.