I ran across this very sleek Electronic Musician Emergency Adapter Kit and it inspired me to post my own Gig Survival Kit. I used to carry a similar collection of adapters, but now I only carry a few adapters augmented by a set of tools. 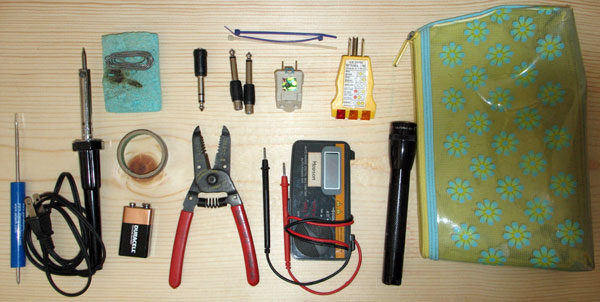 From left to right and top to bottom:

I began carrying the soldering tools when I started performing with sensor-augmented instruments using the Basic Stamp and I soon realized that they made most of my adapters obsolete. If I needed some strange cable, it was usually possible to make it on the spot.

The most often used pieces of kit are definitely the flashlight, the spare battery, and the DI boxes. I’ve had plenty of sour/funny/skeptical/scared looks from the heavy-metal sound guy at the club when I begin unpacking my weirdo electronic gear. Then I pull out my DI boxes and I see expressions of relief and gratitude from the sudden recognition that our gear can now speak a common language.

Oh, and the girly-girl cosmetic bag? Simple. It’s free (if you’re male, ask a female friend who wears even a little bit of makeup), it’s unmistakeable which makes easy to find on a dark stage, and it never fails to impress that heavy-metal sound guy.