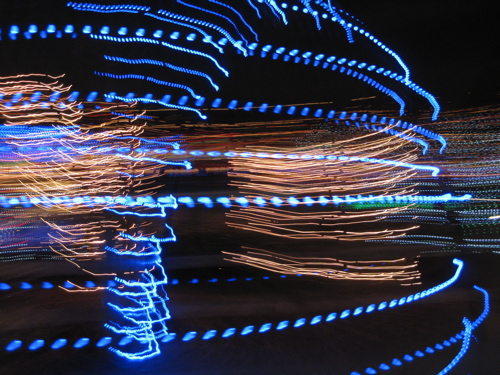 I’ve been thinking about time and technology recently (inspired by the “In A Glass Hour” series of lectures at EMPAC). I’m interested in the phenomenon of ETA–estimated time of arrival–which seems to have become both more widespread and subtly different due to technological developments.

No longer confined to airports and train terminals and Cape Canaveral, we now get ETA information from GPS units in our cars, and something similar is at work in software within every user-interface progress-bar. And the nature of the experience seems to have changed as well, moving from discrete aperiodic estimates to a continuously shifting series of updates. The result is that the estimate is never wrong (we do, in fact, arrive at our destination precisely when the GPS tells us we have arrived) and yet it’s somehow no longer trustworthy because the myriad compensations and recalculations are hidden.

Thinking this through reminds me of an experience I had while hiking in Venezuela’s Gran Sabana. I was out to climb Mount Roraima with two Germans, two Brits, and a Brazilian. We had hired a guide from a nearby village made up of Pemon indians or other indigenous people. Periodically one of the hikers would ask the guide when we were stopping or camping or arriving and the answer was always the same: “cinco minutas.” Of course the estimate was always wrong, but we continued to ask. Despite our varied backgrounds, each of us fellow travelers understood the question and its motivation implicitly. Finally the most experienced traveler in our group pointed out that our guide didn’t have a watch and didn’t appear to speak much more spanish than “cinco minutas” and “vamanos.” The fact that we received a plausible answer didn’t mean we weren’t asking a ridiculous question. We stopped asking when we would arrive and instead asked “Is there water nearby?” or “Is there a place to rest ahead?”